Diagnosis of Unbalance in Fans

Fans have a high presence in the industry to fulfill cooling, air circulation, and gas exhaust functions. Unbalance is a common cause of high vibration in industrial fans. However, a bad diagnosis is also very usual in the maintenance department. In this article, we will explain to you the keys to accurately diagnose unbalance in fans.

What is unbalance in fans?

High vibration is not unbalance

I remember when I was working for a service company as a vibration analyst that it was very common to get called by customers looking to balance a fan. After arriving at their office, the cause of the high vibration was not unbalance. It is a very common belief in the industry that the only cause of high vibration in fans is unbalance.

Advice: If you are a service company and you get called to balance a machine without having a previous diagnosis, include in your commercial proposals (offers) the cost of the vibration analysis in case unbalance is not the cause of the high vibration.

Other causes of high vibration in fans are: structural looseness, high clearance, belt problems, misalignment, cracks on the rotors, and faulty bearings.

Causes of unbalance in fans

The most common cause of unbalance in fans is the accumulation of material or the wear of the fan blades depending on the operation of the fan. Both situations cause a radial unbalance of the fan’s mass.

Another common cause of unbalance in fans is the thermal effect. When the fan reaches the operational temperature, the temperature of the fan may not be uniform. This causes non-uniform expansion in the fan, which causes the center of mass to be modified.

The wear of the fixing bolt or the wedge (or the keyway) of the fan is another cause of unbalance. When the fixture of the center of the fan with the rotor loses rigidity, the center of mass is moved, thus creating a decompensation of the balance. This is something that must be checked before starting a balancing process on a fan.

Talking to service engineers and according to my own experience, sometimes the cause of unbalance in fans is, ironically, the correction weights that have been placed on it during previous balancing tasks. We do not know who did that work in every case, but in the opinion of the experts, it is possible that those balancing works were done where the balance was not adequately diagnosed.

Diagnosis of unbalance in fans

The most commonly used predictive technology and the one that is best for diagnosing unbalance in an industrial fan is vibration analysis.

Generally, unbalance is characterized by a vibration spectrum where the radial rotational frequency of the rotor (1X) prevails. When there is unbalance in a plane, the phase at both ends of the rotor will be 0º. Unbalance in a plane or static unbalance can be verified by having the fan idle, by disconnecting it from the motor and rotating the fan to see if it has a fixed idle position. If the fan performs a counter-rotation to go back to its idle position, it is showing unbalance.

Unbalance in two planes or dynamic unbalance is diagnosed the same way as the static unbalance, but with the exception that there will be a phase differential between the ends of the fan. Ideally, if the weights are displaced at 180º in two planes, then the phase will be 180º. 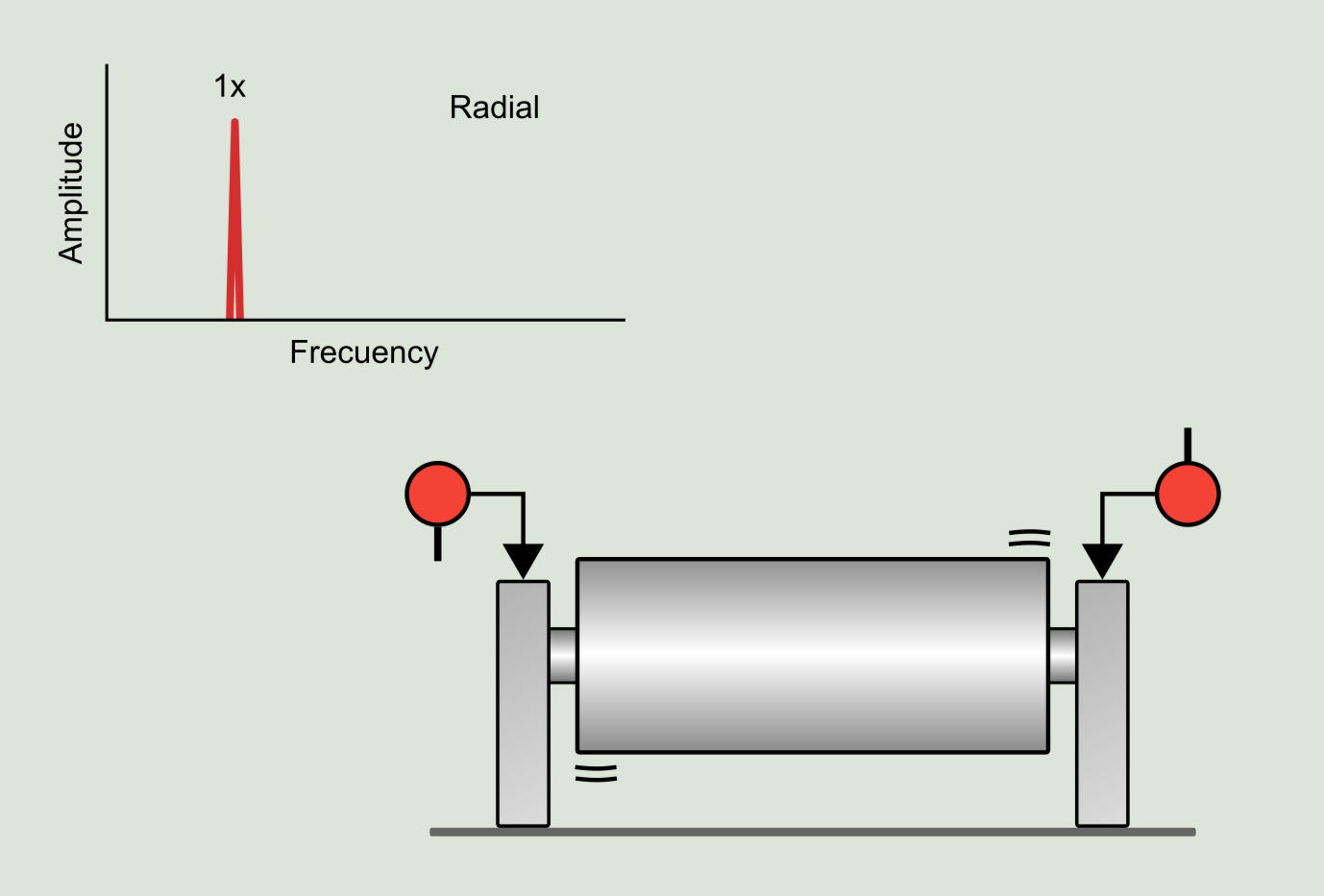 In overhung fans, the pattern of unbalance is observed with a higher prevalence in the axial direction. 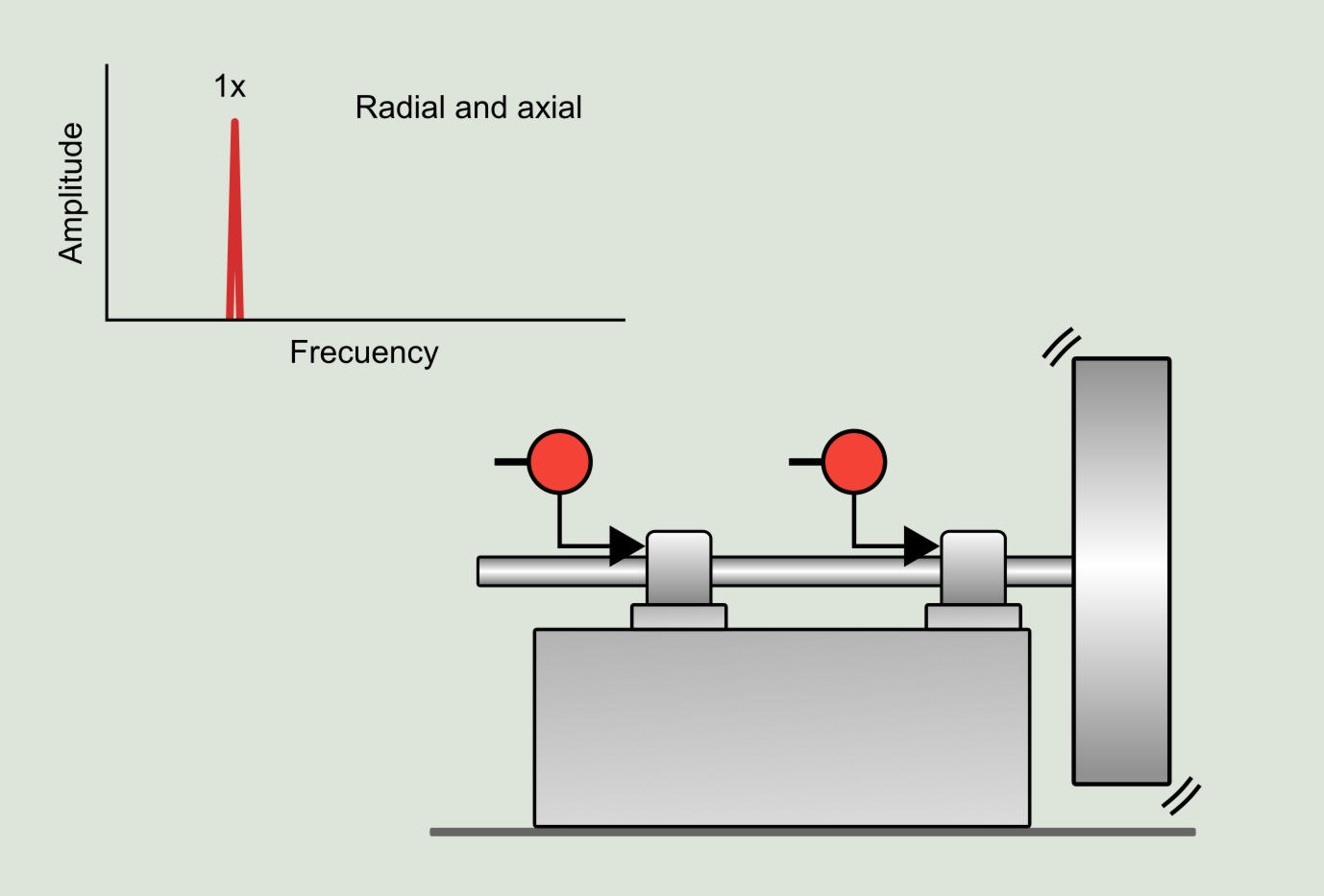 If the machine has a silentblock or isolators for fastening, make sure they are in good conditions.

If you have the opportunity to turn the fan off, and it is possible to perform a visual inspection of it, verify its temperature, the cleanliness (or wear) of the blades, the fixation of the fan to the rotor, if there is any axial clearance when rotating the fan and the presence of correction weights from the previous balancing or from the factory. It is also important to ask the maintenance department if they have balanced the fan before, if they have changed it recently or if they have performed any modifications on it.

If a fan requires balancing periodically, and it does not have any material accumulation, blade wear or foundation problems, then you may suspect the presence of a resonance problem. Machine balancing is a non-periodic corrective task.

If you suspect there is a thermal effect, or you want to discard unbalance due to temperature, make sure to get readings of the spectrum at different operational temperatures from the start-up of the fan.

Report on vibration analysis for a fan.

The most important part after making an accurate diagnosis in the vibration analysis of a fan is informing the maintenance department about the condition of the unbalance of the fan.

A vibrations report must contain:

We show you a vibrations analysis report of a fan with an unbalance problem created with Power-MI. It can be printed in PDF format.

The new way to manage the predictive maintenance is by creating reports with Power-MI. All the reports have the same format and structure. The maintenance departments have one single platform for all the reports of predictive inspections no matter the technology that was used, the brand of the equipment or the analyst that carried out the inspection (own personnel or service company).

If you want to learn more about Power-MI, visit our website: power-mi.com